The history of Elora is rich and this building has been at the literal centre of it all. 2023 marks this structure’s 158th birthday! And for such an old gal, she looks amazing! Having gone through many transformations, Sam, the current owner, decided it needed to be brought back to its original glory.

Starting in 2019 he began cleaning up the exterior and gardens, as he wanted to keep the original design. The interior, however, needed a bit more help. A transformation has been made, keeping the main structure’s authenticity while expanding the uses of the building to allow for retail stores on the ground floor and Pop-Up Shoppes available on the lower level, while the second and third floor hold eight exquisitely remodeled apartments (four per floor).

Reviving the name of the famous hotel, “The Dalby House”, this 3-storey luxury building with functioning basement will bring back much of the hustle, bustle and energy of its roots.

The vision of the project was two-fold: Reconnect the grand structure with the centre of town, and give Elora another anchor point for the core as an experiential hub of innovation, commerce and community as the town continues to increase in magnetism.

“As an investor I was intrigued with an opportunity to purchase a part of Elora’s history with the acquisition of the Dalby House property in 2019. Our investment in the conversion to residential was driven by the fact that Elora was very limited with residential inventory, and giving back the experience of living in its own history was a privilege that was only fitting to the beautiful town that Elora is, rated as one of the most beautiful places to live in in Canada.

Owner Sam Bhanji states “As an investor I was intrigued with an opportunity to purchase a part of Elora’s history with the acquisition of the Dalby House property in 2019. Our investment in the conversion to  residential was driven by the fact that Elora was very limited with residential inventory, and giving back the experience of living in its own history was a privilege that was only fitting to the beautiful town that Elora is, rated as one of the most beautiful places to live in in Canada.”

Artists renderings including layout, décor and furnishings are provided for illustrative purposes only. Unit layout, finishes and features are subject to change.

Click here to view the images via Google Photos

The Carroll – UNIT B – FULLY LEASED!

Telling the entire story of the Dalby House would normally take volumes, so we have selected key highlights around innovation, collaboration, resourcefulness and the community. All these things are what makes a building like this thrive! Now you too can be part of Elora’s story.

History of the Dalby House

Much of the history, Did You Knows? and articles can be attributed to columnist Stephen Thorning, who passed away on Feb. 23, 2015.  Used with permission. Thank you.

Robert Dalby became a hotel owner in 1862 with the purchase of Elora’s Royal Hotel (now the older section of the town’s Legion Hall).  Within eighteen months, Dalby undertook a stagecoach line that ran from Guelph to the doorstep of the Royal Hotel.   It was common in that age for hoteliers to manage stage lines that terminated at their inns: additional revenues were generated in securing contracts for parcel handling for the municipality.  The thirsty, well-heeled traveller, those who could afford to pay a trip fare of 50 cents (a half-day’s wages for the average worker) would be eager for good food and drink following their journey.  In 1863, Dalby decided to construct a new hotel in Elora, one befitting the refined tastes of his clientele and serving as the terminus for his stagecoach lines, which by this time extended to Harriston and Glen Allan, as well as Guelph.

Soon after Dalby had decided to build, Andrew Gordon, Elora’s fractious and well-known harness-maker, expressed his intention to construct a new building.  The two men, who were vocally opposite in politics, background and outlook, collaborated on a common facade for the building, situated on the periphery of Elora’s commercial core at the intersection of Metcalfe and Geddes Streets. Both men believed that this site would eventually be at the heart of the village.  W. H. L. LaPenotiere, a surveyor and civil engineer, and Elora’s postmaster was commissioned to design their buildings.  LaPenotiere created a three-storey, flat iron structure that took full advantage of the pie-shaped lot.  The style was tasteful and simple.  A principle decorative feature was LaPenotiere’s use of contrasting red and white brick.   Dalby and Gordon relied heavily on local tradesmen for the work and construction was completed in the fall of 1865.

Andrew Gordon splurged by having a stone cutter carve “Gordon’s Block” into a stone placed on the wall at the peak of the new building – to Dalby’s considerable annoyance.  Newcomers to the village would come to associate Gordon’s name with the entire structure.

Gordon’s portion of the building contained his leather shop on the ground floor.  Upstairs was a law office for his son, and on the third floor a photography studio for another of Andrew Gordon’s sons.  The roof at the peak originally contained skylights for the studio.

Dalby’s portion of the building contained an office dining room, bar and kitchen on the first floor.  On the two upstairs levels were fourteen well appointed bedrooms and three sitting rooms.  Hotel bedrooms at that time were quite small; socializing was done in the bar and in the sitting rooms.   The roof over the hotel was flat in the middle portion, allowing a promenade deck that afforded an excellent view of the village and surrounding countryside.  A wooden sidewalk and porch were added along the front of both portions of the building in 1867.  The hotel featured a balcony over the main entry.

Though the Dalby House was the most expensive of Elora’s hotels, business was so good that Dalby made an addition on the south end of the building, adding retail space (rented out to a hardware store) and additional second-floor bedrooms and third-floor meeting hall.

The railway was extended to Elora in 1870, putting a sudden end to the stage business.  Elora was no longer a stopover point for people travelling north.  The loss of this business was offset by an increase in commercial travellers and salesman coming to Elora.  Dalby attempted to retain the reputation of the Dalby House by meeting all trains with a brand new omnibus drawn by a matched team of four grey horses.

Recognizing the economic changes that were taking place in the region, Robert Dalby abandoned his stagecoach business.  Robert’s younger brother, Frank, who had been handling the day-to-day operations of the hotel since 1867 expressed his desire to leave his position and move to British Columbia.  In 1873 Dalby leased out the hotel for a period of five years to James Allan, who had been managing a hotel in Harriston.  Dalby turned his attention to building a strong industrial base in Elora.

James Allan proved to be an immediate disaster as a hotel keeper.  The Dalby House soon lost its reputation and Allan abandoned both the business and his wife after a year.  To salvage the business, Dalby looked down the street to Frank Vickers, manager of the Royal Hotel. He hired Vickers to restore the lustre to the Dalby’s tarnished regard.  The Vickers family had been in the hotel business in Elora for over twenty years.  The Vickers’ reputation was based on the culinary skills of Frank’s wife, Maria and their daughter, Mary Jane.  The Dalby House revived on the strength of the dining room.  In 1878, upon the illness of Maria, the Vickers family was forced to relinquish the Dalby to Frank Dalby, newly returned from his B.C. adventure.  He remained in charge until his death in 1897.

Few travellers and declining barroom receipts in the face of the temperance movement meant lean times for the Dalby House in the 1880s and 1890s.  Andrew Gordon declared bankruptcy in 1880 and he died a couple of years later.  His quarters were transformed into a barbershop which remained for over forty years.  The hardware store on the south end of the building closed in the 1890s.

After the death of Frank Dalby, the hotel changed hands frequently.  Proprietors included F. Gale, Harry Topham, Michael Korman, Aaron Roos, Charles Sachs and Henry Hastings.  The hotel was valued at $5,500 in the days when Roos, as owner, changed the name to the Iroquois Hotel.  Sachs took over in 1904, undertaking major renovations.  Sachs completely rearranged the ground floor, moving the dining room into the former store’s premises.  Sachs replaced the large windows and storefront with doors and windows that matched the rest of the building.  The upper floors over the barbershop were converted into additional living quarters.  Proper bathrooms were added, with running water supplied by a gas-powered pump. Bucking the trend toward electricity, Sachs installed gas lighting.

Sachs sold the hotel to Henry Hastings in 1912.  Hastings was killed in 1919 at the wheel of his brand new 12-cylinder National automobile.  Later owners were Murray, Bradley, Robert Sachs, and Bolen.

The barroom in the refurbished Iroquois was open for only five years, as the Temperance Act came into force in 1916 as a war measure.   Despite the war, the Iroquois remained open and remained the only hotel to survive wartime prohibition.

In 1932, W. J. Bradley agreed to provide a public women’s restroom in return for a $100 tax reduction. The reappearance of alcohol in July 1934, when the L.L.B.O. licensed the Iroquois.  The infamous barroom regulations made beverage consumption as glum and unattractive as possible.  The bar closed at 10 p.m. (and earlier on Saturdays in the hope of driving drinkers to bed early and ensure that they were well rested for the sermon on Sunday morning.)

Wilson Veale took over the establishment in 1954 and retained ownership for 32 years, longer than any previous owner.  For the first eight years, he was in partnership with his father-in-law, Walter McBain.  As Ontario’s liquor laws eased, entertainment was introduced to the barroom.  The Veales made a number of internal renovations to the premises.

Mindful of the heritage of the historic hotel, Shane and Hugh Curry, Previous owners, have changed the name back to Dalby House and have made efforts to restore some of the architectural detailing of the original structure (1988-2008).

Rick Miller and David Petretta, business partners in construction, acquired the building in 2008 and, recognizing the influx of family physicians into Centre Wellington, they partnered with the Upper Grand Family Health Team to update and convert the building into medical offices. From the foundation up, they immaculately restored the exterior of the building while bringing the interior up to date with all the necessary technical systems and building codes.

Appreciating the beauty and soundness of the structure, and having a love for its history and the community of Elora, Sam Bhanji jumped at the opportunity to purchase the building in 2019. He is excited to be able to reintegrate the building into the town’s vibrant core by converting the offices into retail opportunities for the many artisans and shopkeepers in town, as well as offering solutions to the apartment shortage in the area by converting the second and third floors to luxury living apartment rental units which will be available for occupancy December 1st, 2021. 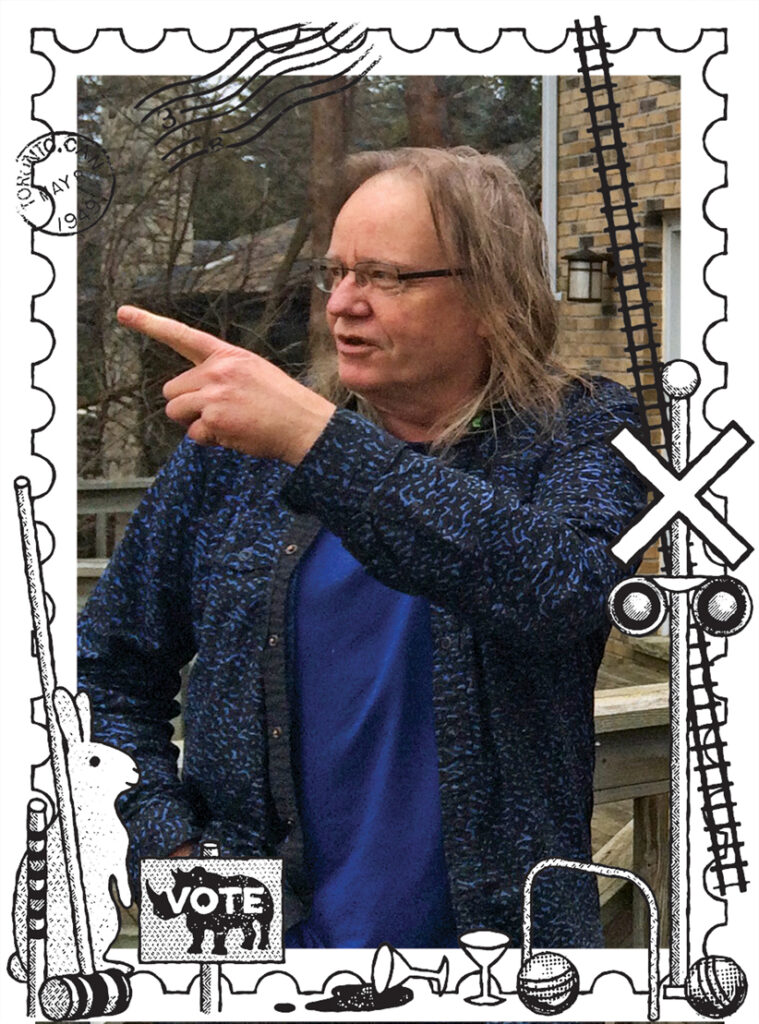 (From Susan Thorning) “Steve wrote quite a bit about the development of businesses in Elora.  Currently the Historical Society is doing the preliminary work to publish a manuscript of a scholarly history of Elora which I found in two typed binders in Steve’s study. The Dalby brothers and Andrew Gordon were very important in the early days of the village and their activities and influences are dealt with in many chapters.”

Here is some more information about the book:  https://www.wchs.ca